ESA’s Living Planet Symposia attracts thousands of scientists from around the world.  Given that Earth observation has played a fundamental role in advancing our understanding of how our planet works and how it is being affected by climate change, should climate scientists show the way by avoiding air travel to conferences thus reducing their personal environmental impact?

NCEO  postdoctoral research assistant, Adam Povey, shares his experience of travelling from Oxford to Bonn by bus and train….

For me, travel was one of the benefits of the academic life that made the stresses worthwhile. A well-organised workshop can feel like the most productive week of a year, making new connections and strengthening old collaborations. Dragging myself out of the office brushes off the cobwebs from months of poking uncooperative code.

The Covid pandemic put all that on hold. In some cases, online meetings worked very well and virtual conferences were a boon for those that struggle to travel. I, though, was eager to return in person to talk to more than one person at once and rid myself of the temptation to Alt+Tab into another window. 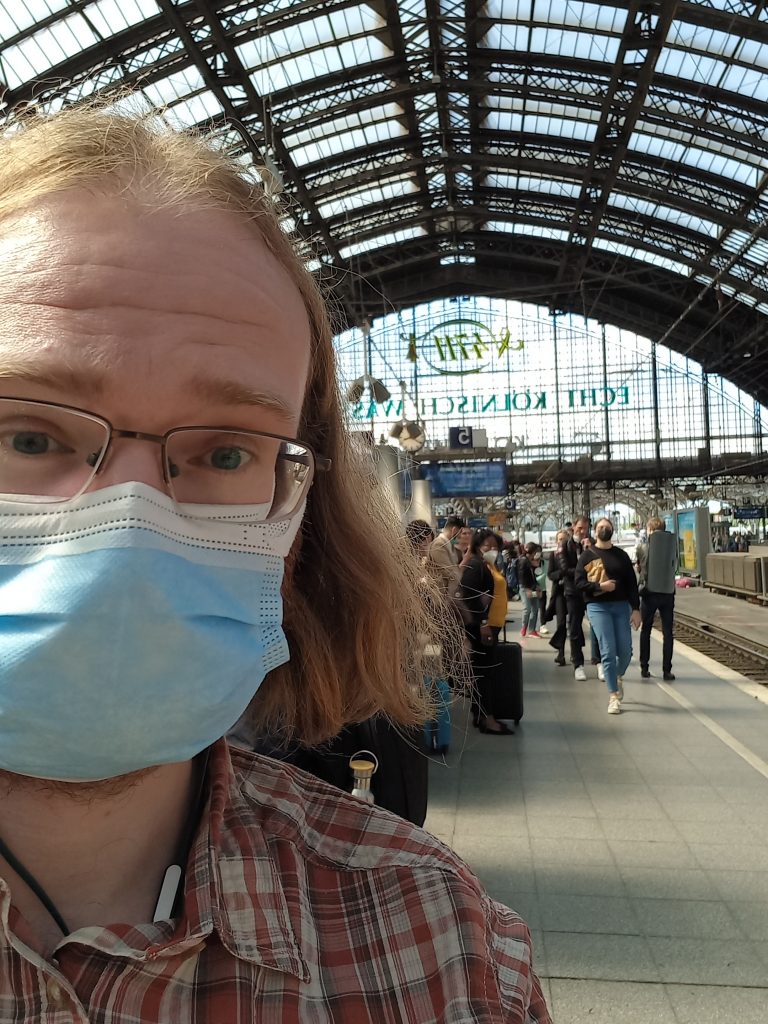 The environmental impact of travel is an often-critiqued aspect of conferences, particularly for climate scientists. How do we justify flying hundreds of people across the world just to listen in a room? Being a fan of the in-person experience, one way to avoid the question is to not fly. As the crow flies, Bonn is a little under 600 km from Oxford, which is about as far as Aberdeen. I wouldn’t fly to Scotland so it should be possible to get to Bonn by land? Right?

Overland and undersea to Bonn

Eurostar and DE Bahn claimed they would whisk me from London to Bonn in only eight hours. They further claimed the return only took eight hours, so I could leave after the Friday lunchtime poster session and be home before 11 pm! A plane could be faster and cheaper than that, but not by much.

There are lots of ways from Oxford to London, but I chose the train as it would get me home the quickest. Justifying that decision, the Great Western Railway deposited me at Paddington Station two and a half hours before my Eurostar. With the spare time, I went for a second breakfast at a nearby cafe, which was doing its best to look Parisian.

Fortified with tea and croissant, I wandered onto the Circle Line and, fifteen minutes later, was in a queue for the Eurostar. It looks like airport security but is nowhere near as picky – there’s no need to take out your electronics and no one cares if you have food or liquids. After that, the UK border took a cursory glance at everyone’s passport, followed by the French giving them a rather more thorough consideration. All told, it was only twenty minutes after arrival that I was sat down in a full waiting room, awaiting my train, which boarded about half an hour later. If I was more trusting of British public transport to run the services it promised to schedule, I could have left the house 90 minutes later and had time to spare. 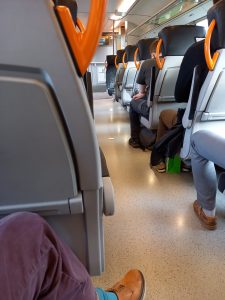 European trains are clean, spacious and run on time… usually.

Once boarded, I found myself sitting next to another researcher heading to LPS. A more entertaining and polite traveller would now present a full account of the gentleman’s research and would certainly have remembered his name. I, sadly, was in a rather interesting part of my book and so only exchanged a few pleasantries.

An advantage of train travel is that all of my stuff was just above my head so, when I ran low on water or reading material, it was easy to fetch more. There is a lot less planning ahead compared to flying

Two hours later, we arrived in Brussels for what was ostensibly the most difficult part of the journey – a 25-minute connection for an ICE to Cologne. It took me 15, but it could easily take longer if you were seated at the far end of the train, got stuck behind a slow group, or need to use the lifts, in which case you may want to have a few Belgian beers while waiting for the next train.

It was smooth sailing after that, with everything running on time. Compared to a British train, the local services have a lot of leg room and more than enough space under the seat to stow my luggage without being in anyone’s way. There’s also a minimal gap between the train and the platform, so you could easily wheel on your bags.

This National Express-run train (!) got me into Bonn on schedule, arriving at my hotel a little before 7 pm: about nine hours door to door. As the trip was broken into segments, it didn’t feel that long and I wasn’t particularly exhausted (though did greatly appreciate my first beer at the pizzeria across the street).

The Living Planet Symposium is organised by the European Space Agency every three years and is largely structured around their satellite missions and research programs. Talks are more likely to be programmatic or aspirational than cutting edge or inspirational. For example, there were numerous sessions on unlaunched satellites, but it’s a useful conference for connecting with ESA teams and finding out what’s in the pipeline. EGU, held the same week, will have attracted anyone with shiny results to show off, but I just wanted to catch up with colleagues in the Climate Change Initiative after several years.

I was quite happy with the conference. Trying to be objective, it was fairly middle of the road but, having been away so long, I don’t think I needed much to be satisfied. 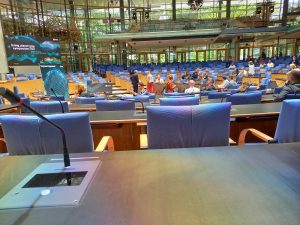 The venue for plenary sessions used to be the German parliament chamber.

I started the journey home around 2.30 pm after my poster session finished. It started well, with the U-Bahn into Bonn and a busy service to Cologne getting me to the platform of the bright and airy station with plenty of time to catch the ICE to Brussels.

Sadly, the moment that train arrived we were informed that it was terminating here and the next service to Brussels would be in two hours. Having only had 80 minutes to change onto the Eurostar, this seemed like a problem. Walking down the platform, I recognised half a dozen other UK scientists looking despondent. After some deliberation, we rallied together and went to the ticket office with the idea to reserve seats on the next train to ensure we wouldn’t have to stand. 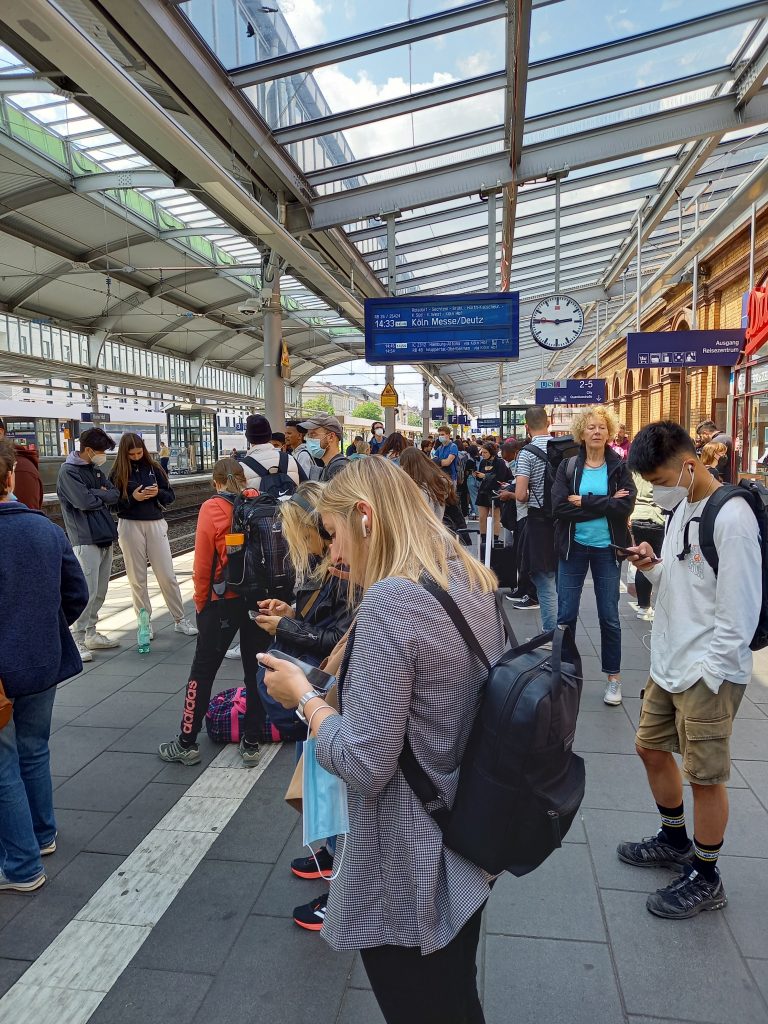 On the one hand, the train was fully booked. On the other, the kindly old lady behind the desk gave us all an official-looking bit of paper that assured our connections that they should honour our tickets and a form to claim compensation from DE Bahn.

Things went fairly smoothly after that. We all found seats on the later, and importantly most punctual, train. In Brussels, the gate guard was extremely understanding, giving our group a table on the next train to London without so much as a glance at our paperwork. We cleared security/border control in about ten minutes and settled down in the drab waiting room to the sandwiches and sushi we’d found for dinner.

The Eurostar ran to schedule and those of us heading west walked straight onto both the tube and a train at Paddington. Half an hour later, at Reading, I changed trains for Oxford. I arrived in time for the last regular bus and arrived home around midnight after 10.5 hours of travelling.

Obviously, that could have gone better but, compared to the chaos I’ve had when a flight is cancelled, that was easy. No luggage was lost, I got home the same day I’d intended to, and got the added bonus of having a group to chat with on the way back. For meetings in Western Europe, I think I’m quite likely to take the train in future as I appreciate the plentiful leg room, the lack of luggage restrictions, the free wifi, and the lower stress since there’s a regular schedule of frequent trains in case you miss one.