Choking toxic pollution in the 'Lungs of the world'

An NCEO scientist says the fire and smoke pollution in Indonesian Borneo is “the worst situation he has ever encountered”.

Scientists are shocked by the extent of the fires raging across Indonesia and the hazardous smoke they create, saying they are causing more damage to the environment, wildlife and local communities than first imagined.

On the Island of Borneo the rainforests and peatlands are burning in the worst fires in almost 20 years. The annual fires are much worse this year than usual because of the hot, dry conditions of this year’s mega El Nino, and land use change has exacerbated the problem.

Martin Wooster, Professor of Earth Observation Science at King’s College London and the National Centre for Earth Observation (NCEO), travelled to meet an international group of scientists and to measure the extent of the problem close to the fires’ epicentre in Palangkaraya, the capital of Indonesian Borneo.

“There is a complete envelopment of smoke all over the place,” he said. “If you’re here without a mask, you are breathing much of that smoke into your lungs, which is obviously, I would say, extremely hazardous for your health.”

He saw that local people have little or no protection, many wearing surgical masks that offer poor relief from the noxious gases and particulates. 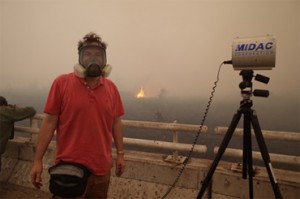 Professor Martin Wooster says the fires in Indonesian Borneo have created the worst environmental disaster he has ever encountered.

Hospitals across the area are reporting thousands of new patients suffering from respiratory illness. The group of scientists worry that, given the levels of toxic gases they measured, the effects of the fires on human health will continue to worsen.

Normally, carbon monoxide measurements register under one part per million (ppm). But in Central Kalimantan, Wooster measured 30 ppm—from inside the hotel for the scientists’ meeting, more than five kilometers from the nearest fire. In the field particulate levels were up to 75 times the maximum “safe” levels stipulated by the EU, and are likely to remain there for weeks or even months more as the deep soils of the peat continue to smoulder.

“I’ve visited quite a few sites of biomass burning during my 10 years or so of research in the area. And I can certainly say this is the worst situation I’ve ever encountered for biomass burning or any form of combustion in a natural environment,” Wooster said. “Here you’ve got the actual soils that are burning alongside the vegetation on top, which is often seen in ferns and things that are quite flammable, not the original forest.”