Data from the Tropomi instrument onboard the Copernicus Sentinel-5P satellite has been used to detect methane plumes over some of Europe’s largest methane-emitting coal mines.

According to the European Commission and the European Environment Agency, the top 10 largest methane emitting coal mines in Europe are in Poland. Collectively, these mines released around 282300 tonnes of methane into the atmosphere in 2020.

Thanks to methane observations from the Copernicus Sentinel-5P satellite, we can now observe regions with enhanced methane concentrations from strong point sources all over the world. Satellite observations are a powerful tool for improving estimates of emission strength, seeing how they change over time and can also help detect previously unknown emission sources.

Scientists from the University of Leicester have used data – generated by the University of Bremen – from the Tropomi instrument onboard Sentinel-5P to observe methane concentrations associated with key mining regions across Poland and demonstrate whether the satellite can capture coal mining emissions.

The coal mining industry contributes significantly to global methane emissions and is responsible for around 33% of all fossil fuel related emissions of methane from 2008-2017. Typically, for underground coal mines, large-scale ventilation systems are used to provide the flow of fresh air underground to help dilute gases such as methane, as well as help regulate the temperature for safe working conditions.

However, this ‘ventilation air methane’ ultimately ends up being released into the atmosphere, thereby acting as a source of fugitive methane. 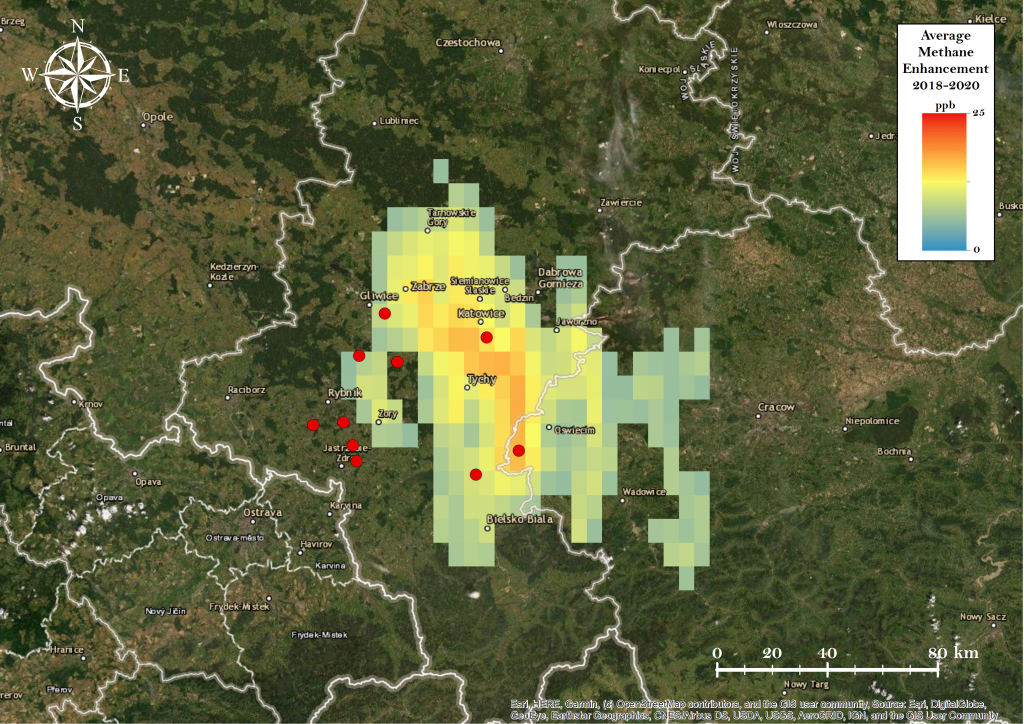 The accumulated methane from the area pictured here from 2018 to 2020 revealed that the largest methane concentrations were concentrated in the Upper Silesian Coal Basin, west of Krakow, a prominent mining region dominated by a cluster of underground coal mines.  The red dots indicate the positions of the largest underground coal mines.  Methane data: ESA contains modified Copernicus Sentinel (2018-20), processed by Sembhi, H. (University of Leicester) and Ruiz Villena, C. (NCEO).

“As some of these mines are in very close proximity to each other, individual plumes are tricky to observe. However, we were able to detect averaged large-scale methane enhancements, approximately 20 parts per billion above background concentrations.”

Scientific investigations are ongoing to determine the source emission rates associated with these large-scale coal mining methane enhancements observed from Tropomi which can be complemented by high-resolution sensors such as GHGSat to provide observations for individual sites.

“Despite some limitations in satellite data coverage, owing to clouds, we found that the regions of largest concentrations detected by Tropomi are consistent with the largest emitting mines in Poland as reported by the European Commission emission database.”

This information will also be a valuable addition to the work of regulatory bodies in designing fast-acting abatement measures that could have a significant and almost immediate impact on mitigating such methane emissions in the near future.

Clusters of underground and surface coal mines in Europe 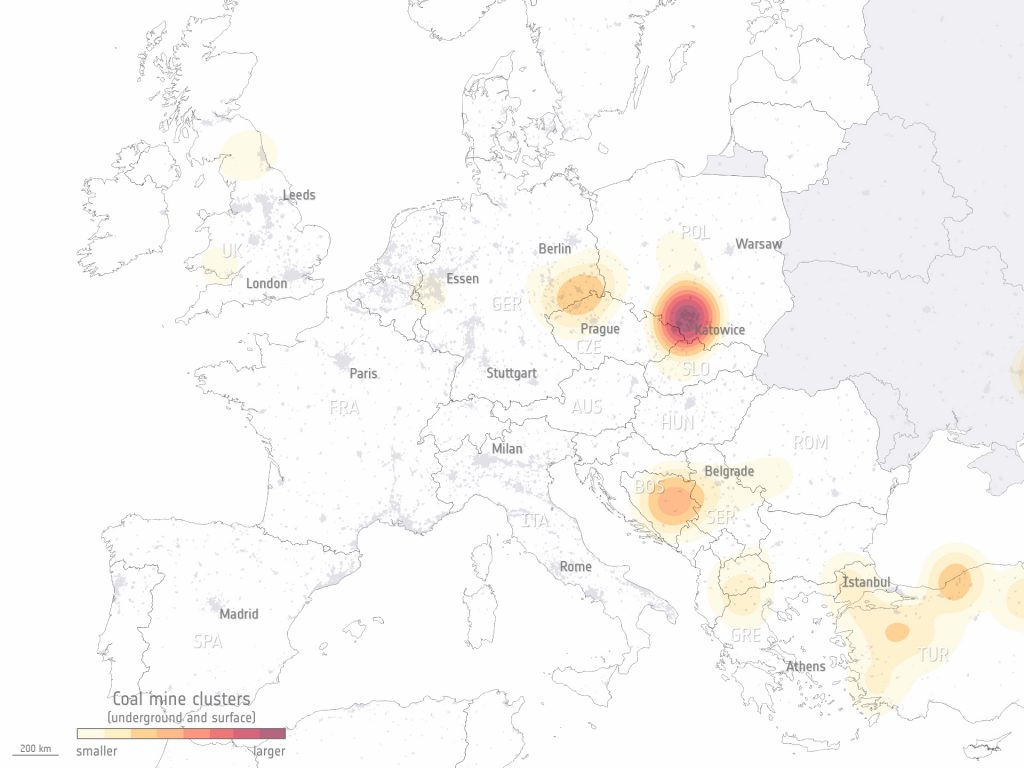 This map shows the clusters of both underground and surface coal mines in Europe. The darker the red, the more coal mines there are in the area. The map uses data from the Global Coal Mine Tracker – a worldwide dataset of coal mines. The data includes operating mines producing one million tonnes per year or more, as well as smaller mines. Credit: ESA  (Data source: “Global Coal Mine Tracker”, Global Energy Monitor, January 2022).

Methane and the impact on our planet

Methane is an important greenhouse gas emitted from natural sources, such as wetlands, as well as human activities including agriculture, wastewater management and fossil-fuel production. Methane is the second most abundant anthropogenic greenhouse gas after carbon dioxide yet is more than 25 times as potent as carbon dioxide at trapping heat in the atmosphere.

It is important to track and manage fugitive methane emissions, gases that escape or leak unintentionally or through a controlled release from industrial processes, as significant gains can be achieved in limiting global temperature increase by curbing such emissions.

It is therefore critical to implement policies aimed at reducing methane emissions as a key to combating climate change. This is particularly timely with more than 100 countries signing up to the Global Methane Pledge, which aims to reduce methane emissions by 30% by 2030; signed during COP26 in Glasgow in 2021.

“The Sentinel-5P mission is now being successfully used to demonstrate spaceborne capabilities to support the monitoring of European and international strategies on methane emissions monitoring. The upcoming atmospheric Copernicus Sentinel-5 and Copernicus Carbon Dioxide Monitoring missions will ensure the extension of this capability over a long time period.”